WHAT DO YOU DO IF YOUR LITTLE BOY WANTS AN AMERICAN GIRL DOLL FOR XMAS?

The letters that left the Place Under the Pine this year addressed to Santa were, as usual, short and sweet. However, Elli's was especially small with only one request - a boy doll with clothes. (Translation: An American Girl style 18 inch doll. Boy. Light Hair. Possibly wearing a retro Edmonton Oilers Hockey jersey with number 99 on the back).
Unfortunately, American Girl, Our Generation, Journey Girl...all of the poplular brands of 18 inch dolls do not have a boy version. And, even Santa does not stock a boy doll like this.

So, what do you do if your kid wants a boy doll?

You get the scissors out and use your creative juices to whip up a replacement.

Black Friday, the Parents of the PUTP were seen hitting the Target in Watertown (USA) in search of a doll that either looked like Elli or looked 'boyish'. Shannon, an Our Generations doll, that has a face resembling Elli's and came in a camping set (which meant it was not dressed in a gown and adorned with high heeled shoes and jewellery) hit the spot. She came in cargo type pants and had some camping equipment too.
The Parents were also seen going through the big bins of other doll outfits, pulling up things like a bowling set and any others that came with unisex clothing.


A few nights later Jen was seen with the hair cutting kit. This is not an uncommon sight as she cuts the hair of every other citizen in the PUTP. The peculiar thing was her 'client' - a long haired 18'' doll! 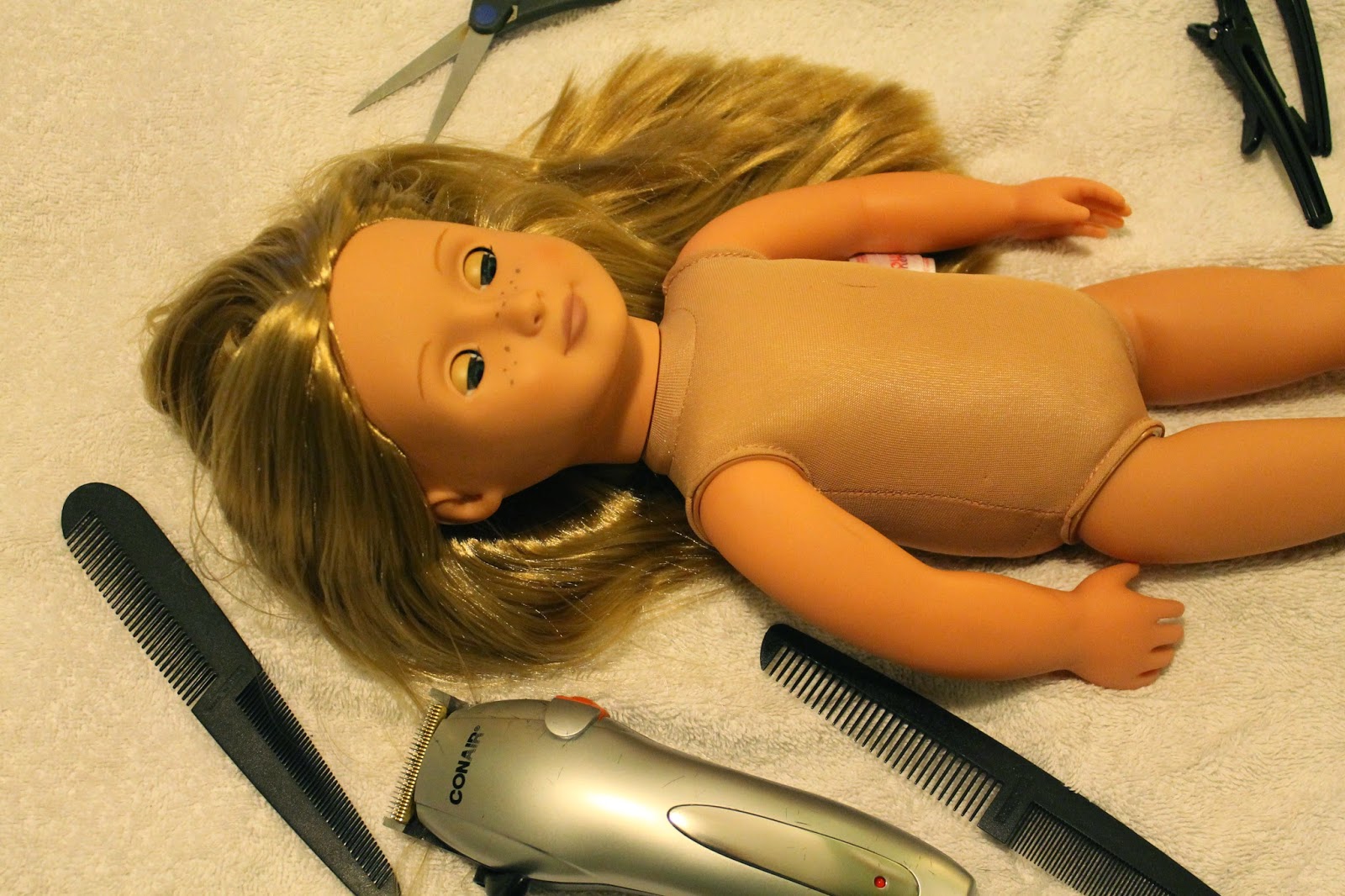 After much cutting, recutting, then cutting again, "Shannon" had a new hairdo. Paired with a sporty jacket and some blue runners she passed for a little boy - luckily these dolls are not anatomically correct :)

The doll was then placed back in the package, wrapped, and put under the Christmas tree. Another overachieving present by the PUTP's best parents!

"Shannon" has been well played with since the unwrapping on Christmas day. The doll has been renamed "Ben" and has been towed along on many adventures - to the arena, to the grandparent's. A visitor to the PUTP may hear the name Ben so often they may believe there is another child living there.
Ben has also been well supplied with homemade clothes, store bought clothes, skates, furniture...almost anything a doll could need.

A pantless Ben walks up the stairs

One parent from the PUTP found it odd that finding a boy version of the extremely popular 18 inch dolls was so hard. He was inspired to write an open letter to the manufacturers of these dolls.

This year for Christmas my little guy asked for a doll, such as the ones you make. However, he requested a doll that was a boy. I was disappointed to find out that no such doll exists. I find this unacceptable on many levels and am left wondering why on earth would you not make a boy version?
I am going to be presumptuous and guess that you will answer - we do not make boy dolls because the market for such a doll is not there.
I know we are not the only family in search of a boy doll. This segment of the market may not be near as big as the girl, but, it is there. And, as a niche type market you may be able to produce a smaller number of boy dolls and offset the loss in producing this limited amount by charging more and not selling them in the same manner, but instead, for eg making them available online only. I am certain you could find an alternative.
I do not usually get worked up about age old debates but this has gotten me all riled up. This whole situation only emphasizes the continuing gentrification of toys, ie Dolls are pink and only for girls, Superheros are blue and only for boys. It may be social pressure, but, it is also a toy manufacturing phenomenon. In the end it is you, the toy makers, who end up picking what gets made.
Where does the idea of being a good corporate citizen fit in here?
Play is a chance for kids to explore their world. Children can use toys to play out and practice scenarios they may encounter in life. Is it a good idea to exclude boys from the world of dolls? How are boys supposed to practice being a parent? Carting their doll around, thinking about how they would take care of another person, is a skill everyone should know. It not only makes society a better place, but, fulfills the idea of manhood too (the ability to provide and take care of one's family). Dolls are for boys too! In my mind, not making a boy doll is somehow unethical, it is not being a good corporate citizen, it is bad for society as a whole. We need to change the attitude towards 'boy' toys and 'girl' toys and I think some of the responsibility lies with you.