The kitchen was bustling with activity. A small mountain of cucumbers, peeled garlic cloves, the smell of dill in the air, and a simmering pot of a mysterious vinegar mixture was all the evidence one would need to know that it was PICKLING TIME! 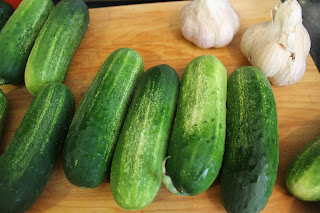 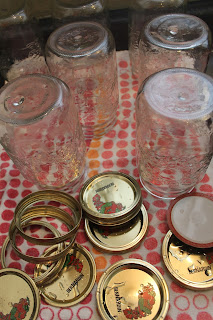 This would be the first batch of pickles ever made in the Place Under The Pine.
Everything seemed to be in order - dill & garlic were placed into a jar. 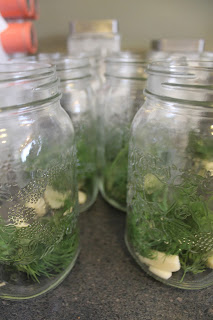 Then cucumbers crammed in. 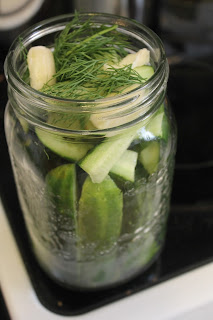 The special mixture of vinegar, salt, and secret ingredients was added and the jars were given a hot bath to seal them shut. 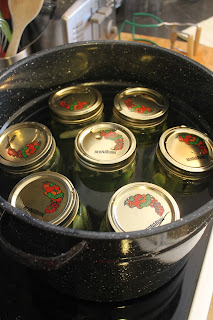 The end product looks amazing, the process smelled amazing, therefore, they should be amazing pickles. Only time will tell - three weeks to be exact. 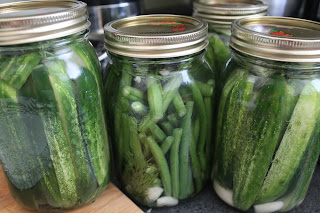 There has been a resurgence of interest in the Harry Potter franchise lately. Various books in the series are being read by 4 out of 6 citizens. All ages are reading them - and the ones that are not of reading age are playing with Harry Potter toys.
It is reminiscent of a time, many moons ago, when Lolli first read the Sorcerer's Stone and she had a Harry Potter party. And, even a decade before this party when Jen and Matt first read the Harry Potter books.
It is almost magical how Harry Potter has remained so popular over such a long period of time in the PUTP. The story is so well written, so creative, so imaginative, that minds off all kinds enjoy it...even obsess about it.
The battered copy of The Philosopher's Stone has been read over and over and over and over and over and over (at least 10 times) by everyone over the age of 5.
Matty just finished rereading it and commented, "...it really it magical, in a fun whimsical way...there is adventure, wit, humour, friendship, and the triumph of good over evil." No sooner had he turned the last page of book one he picked up book two. 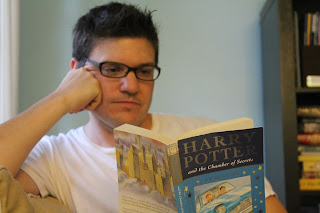 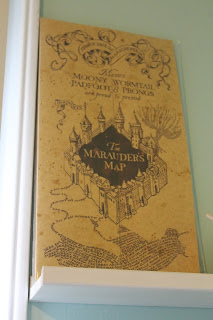 Email ThisBlogThis!Share to TwitterShare to FacebookShare to Pinterest
Labels: Books

RASPBERRY - THE OFFICIAL PLANT OF THE PLACE UNDER THE PINE

The plant that asks for so little, yet gives so much.

The raspberry plant has been named the official plant of the Place Under The Pine. It is a plant that has given nourishment, piece of mind, and pride to the citizens of the PUTP - and in return it has asked for so little.
Seven years ago three small, gnarled, unspectacular looking stalks were plucked from a friend's garden. They were planted in the backyard in the only spot available at the time - a tiny gravel and clay patch right beside the fence (in 23.5 hours of shade to boot). This spot was so undesirable to plant life that grass would not even grow there! Yet, out of this lifeless plot the raspberry thrived; it spread; it filled with berries.
As the garden expanded so has the raspberry. There is a thick bush now where there was once three piddly stalks. The rogue shoots that pop up out of the garden have been transplanted - there is now a row of fruiting plants that line the wall along the front yard. There are plans to export surplus stalks to neighbours and friends who want to start their own raspberry patch.
This plant continues to delight not only the citizens of the PUTP, but, visitors. Earlier this summer a young visitor commented, while eating a handful of berries, "your backyard is so amazing - you grow your own food!'.

Later when Elli retold this story he implied an increased sense of security knowing that we could "just eat raspberries if we ran out of food".
During every summer get-together our visitors pick tart raspberries and praise their taste. It is a real showpiece and source of pride for the citizens of the Place Under The Pine.

And, in return all this plant has ever asked for is a small cutting in the fall.
What an amazing plant.