Why so late in the season? This particular vegetable requires a good frosting to improve the flavour.

How easy was the parsnip to grow? In early spring a few small seeds were buried...in late fall a shovel was pushed into the ground and a game of hide and seek (parsnip style...similar to carrot style) was played. 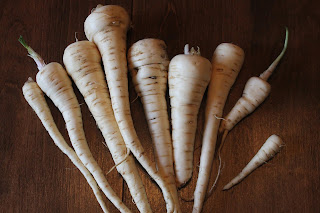 The parsnip is well loved by the citizens of the PUTP, especially when roasted. Great taste and low effort to grow makes this plant a new staple of the garden.
Posted by Place Under The Pine 2 comments:

Email ThisBlogThis!Share to TwitterShare to FacebookShare to Pinterest
Labels: Garden

On Monday, Olivia (our 10 year old daughter) asked me, "Did Donald Trump win the election in the United States?" (we are Canadian to put this into context). She had run across a news headline while working on the ipads at school proclaiming 'Trump won and the world is going to end'.

I calmly replied that there is no way that anyone with common sense would allow a Donald Trump to run their country.

Lolli then started asking really tough questions. "Why does he want to get rid of Muslims? All the muslim people in my class are really nice."
"Why does he want to put up a wall?"
"He sounds racist, is he racist? That is not ok."
I tried to explain that the US is a different country, with different beliefs, a different social structure, a history of racism and slavery and all that...wow, what a complicated thing to try and explain and even harder b/c I don't understand the thinking behind a vote for Trump at all.

What makes it even harder is the extreme difference between Trump and our new prime minister Justin Trudeau. Justin is all about breaking down walls, helping refugees, bringing people together, trying to solve our own racial problems dealing with our native people, and he is just a happy positive guy...with great fashion sense to boot (when he is out and a'boot).

I'm very thankful that we have a leader I can tell my children to look up to.