THINGS ARE STARTING TO GROW!

Tomato Transplant
There has been one failed transplant. A rainbow striped tomato, imported from the plant guy who sells plants every weekend off his driveway on McEwen Drive, withered and died. However, in its place one of the home grown Orange Heirloom from last year was planted and appears to be thriving.
This was the last available spot, and cage, that would accommodate a tomato plant, which leaves the PUTP with a surplus of four Orange Heirloom seedlings. These will be raffled off as the first ever PUTP's prize give-away extravaganza (see prize draw at the bottom of this post).

Sprouting Zucchini
The first leaves of the zucchini plants are popping up. This late start was intentional in an effort to use the small garden space as efficiently as possible. Zucchini plants do take up vast amounts of space and will crowd out any neighbouring plants. Their placement in the 2014 garden is right next to the strawberry plants. In a few weeks when the zucchini plants are overtaking everything it will not impact strawberry production as they will be done for the season. That's your garden committee planning hard at work.

Raspberry Blooms
This year the amount of flowering blossoms appear to be at a record high. The density, as seen by the picture, shows that in about two weeks the picking crew will need to be ready with five gallon buckets.
If you would like your own raspberry plant, we do have plenty of excess canes sprouting up between the paving stones.

Other Berry News
The first strawberry of the season has been picked. Tasters raved about its sweet strawberry flavour. Since that time six berries have ripened. Of those six, 50% were unedible, being bitten by some rodent or bird. An emergency garden committee meeting is being held to discuss solutions to this terrible situation. Any suggestions from the public on ways to deal with this problem would be greatly appreciated and considered.

Now, the part you've all been waiting for...

If you are interested in one of the surplus Orange Heirloom tomato plants, please leave a comment and/or share this post on your facebook page and your name will be submitted into a random draw to be held in the next week.
Please note, winners must be local or willing to travel to the Place Under the Pine in the next few weeks*.
*You must pick up your own winnings when it is convenient for the PUTP garden committee.


Posted by Place Under The Pine No comments:

The youth training program here at the Place Under The Pine believes that real life experience is one of the best ways to learn, well, real life skills. That is why a plan by the younger citizens of the PUTPs to run a lemonade stand (alongside our Yard Sale) was approved. They were given full rein of the set up, running, and profits of the stand.

Step 1 - Getting Started. The plan started with a seemingly simple trip to the grocery store. But, that is where the first lesson in business actually began. What product to buy? How much to spend? How will it influence cost?
What might seem like common money sense, to buy low and sell high, is one of those skills that must be learned. So, with very little adult advice the children decided on two cans of no-name brand  pink lemonade (cost 67 cents each).
Another suggestion by the 'adult consultants' was to offer another product, in the case of a customer who does not like lemonade. A case of water (at $1.97) was also purchased.

Step 2 - A business without a sign is a sign of no business. That classic saying was all it took to motivate the two budding business-children to make up a couple of informative posters to put on the stand - "I love lem-ons. 50 cents" and "Lemonade 50 cents".

Step 3 - Set up. In cooperation with two other entrepreneurial children, from the Place Under the Lilac, who provided a table and some chairs, the lemonade stand was set up. A cooler with some ice, a half dozen bottles of water and a pitcher of pink lemonade was placed nearby and the crew was ready to sell.

Step 4 - Selling techniques. Something extra was needed to sell the lemonade as the weather was cold and cloudy. It was also early morning. Not the ideal time, or weather, for a glass of ice cold lemonade. Many different approaches to selling the lemonade were attempted, and most were successful. Waving to passing cars, chanting sale slogans, and sitting patiently (using the kid cuteness factor) made sales. But, what appeared to work the best was the simple questioning of passing garage-salers - 'Would you like some lemonade or a bottle of water? 50 cents."
This method would not only draw in the lemonade/water customer, but, also the crowd that thought the stand was cute enough to 'donate' to. Many people offered up donations to reward the kids for all their hard work.
By mid morning, just as the crowds were peaking, the stand ran into one of those delightful problems for business owners - they sold out of water!
A quick call to their supplier and fifteen minutes later they were stocked up again, motivated to sell even more.

As an added bonus, Lolli, brought a nice selection of rainbow loom bracelets to sell in addition to the lemonade. At 50 cents each she had no problem selling them, in one case a single customer bought five!

Step 5 - Analysis and future plans. By the end of the day the business had racked in $13.20. A return on investment of 398.8%! An amazing result for these first time business tycoons.
This success inspired them to dream up even more elaborate businesses and ideas for future expansion. They are now looking to hire an 'adult' to BBQ hotdogs at the next sale. If you are interested please contact me and I will forward on your application. Providing your own BBQ and propane is an asset. 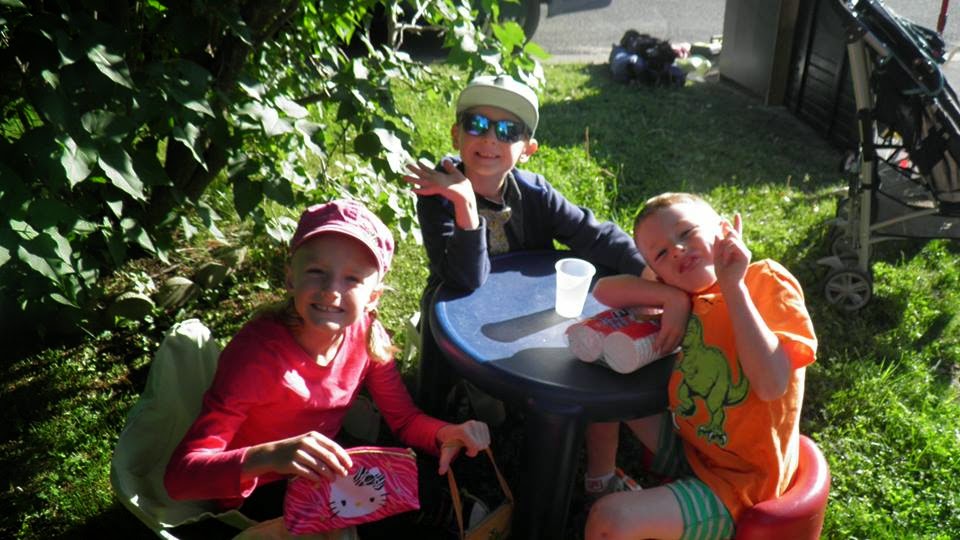 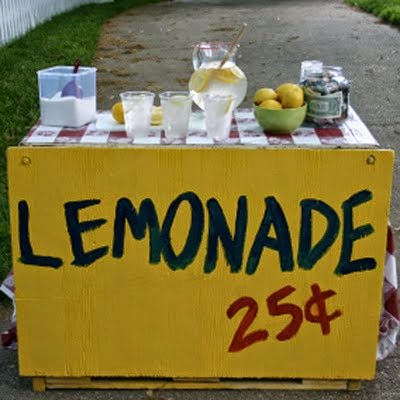 BACK TO WORK AND GETTING THOSE HANDS DIRTY

MOUA - GU1-2014
Work on the 2014 garden has started. The Ministry of Urban Agriculture has slightly modified production and refocused planting to increase output of the vegetables the citizens of the Place Under the Pine enjoy eating.
Brussels Sprouts, which were enjoyed by all last year, were planted in abundance this season. Six plants are thriving in the back row of the garden. Last years garden.
Zucchini, Lettuce, and an Eggplant are also to be included in this years planting plan.

OLD BUSINESS
The return of two strawberry plants, along with one new one, are expected to sharply increase the output of strawberries.

The one plant in section 4B has outgrown anything in the garden up to this point. The secret. In fall, or perhaps early winter, a cushion from one of the patio chairs somehow landed in the garden on top of this plant. It was then frozen there over the winter, covered with snow and ice, thereby shielding the plant from the worst of this terrible winter. This strange situation has really shown that a plan for winter coverage should be looked into this year.
NEW BUSINESS
The Ministry has also attempted, for the first time, to grow seeds from a previous garden plant. Some seeds from the orange heirloom tomatoes, which did extremely well in the garden in 2013, were saved. They have sprouted and are now in the process of being 'hardened'. Estimated time until planting is one to two weeks. Experts are optimistic they will survive and be the new cost effective way of growing a portion of our tomatoes in the future.
The only new plant being tested this year is cabbage. Seedlings are also being 'hardened' off and expected to be planted in one to two weeks. Concerns over the cabbage moth, which effect both cabbage and brussels sprouts, have prompted research into prevention methods. The garden may have to be draped with light cloth or fine mesh in the near future, thereby making it the most fashionable garden in the neighborhood.

The most exciting news it the newest hand to get dirty this year. Oskie is old enough to start earning his keep, and enjoying some time throwing dirt around. So far he has been the most enthusiastic helper of the three.