Construction Notice
The Boys Room will be off limits from the general public for short periods over the spring and possibly the summer. Crews will be painting, trimming, and decorating during this time. Please be aware that some or all of the contents of The Boys Room will be removed, and placed temporarily, in the upstairs hallway or in various other parts of the house. Watch your step!

THE BOYS' ROOM IS GIVEN A MAKEOVER

The Place Under The Pine's star designer, Jen, is working her creative magic again. This time she has taken on The Boys Room. This former spare room turned nursery had slowly devolved into a mishmash sort of a room that functioned ok, but, did not have any pizzazz. Most of the colours and fabrics in the room were from E's baby set up, which was from around five years ago. Since that time he has grown into a full fledged little boy and lil' Oskie has moved in as well. The room was in need of an update, a refresh...just a little tender loving care.
As with most of the PUTP's redesign/DIY projects, the initial planning takes the most time. With so many projects, and so little time to actually work on them, most ideas have years to percolate through our designer's brain before they make it to the top of the 'to-do' list. For months, possibly years, leading up to this makeover, Jen would often be heard suggesting ideas/paint colours/themes/projects/etc for The Boys Room. "Nautical" was one theme that seemed to stick. Navy Blue, was THE colour that had to be incorporated. The room's occupants strongly argued for red to be worked in somehow (however, the suggestion for red walls was vetoed right away).

On a project as big as The Boys Room it usually takes a 'spark' of some sort to really get things fired up. In this case it was a blue and white striped bed sheet on a shelf in Target.
Then, another coincidence happened involving a can of paint. To the untrained eye it looked like any old gallon of grey paint in the mistint/oops/returned bin at The Home Depot. But, to anyone with a designer-eye it was almost perfect, one shade darker than the colour Jen had been looking for...but, at $9 for the gallon (instead of $40) it was worth the trade off.
Those were the things that sparked the reno. Without that bed sheet or that can of paint, the project probably would have dragged its feet for another few weeks, months, maybe even years. Funny how things work out, eh?

The painting began. To spice things up, not that cement grey walls need any, Jen painted a few stripes on one of the walls.  A focal wall it is called. So, out came the level, some green tape, and in no time flat Jen was rolling out some stripes.

A nautical looking round mirror was hung and a couple of hooks for robes and towels were screwed into the wall. Done. 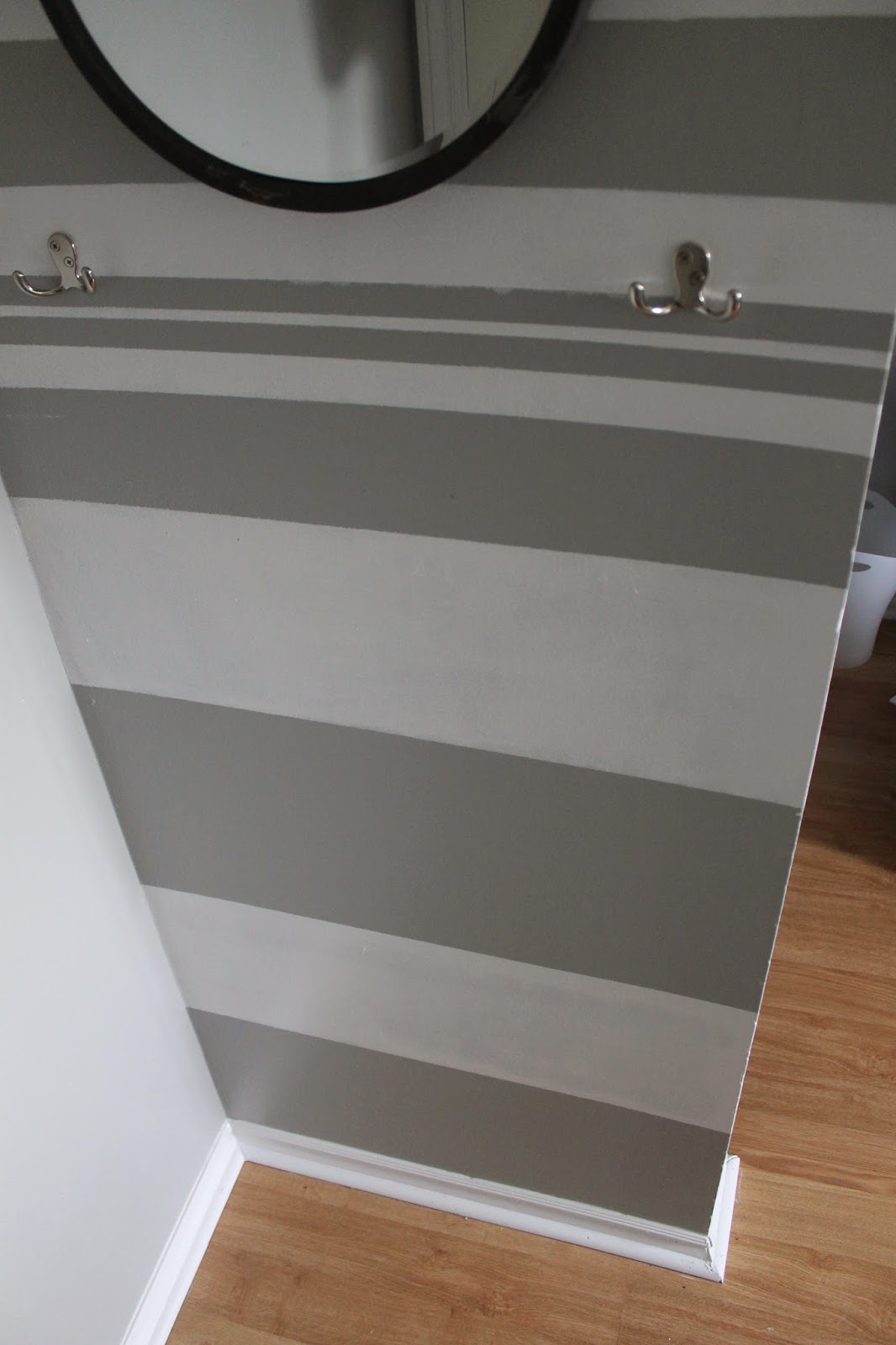 A special thanks to our painter (and ceiling fan installer) Papa, who helped get the project done on a tight schedule.

Next, the entire layout of the room was changed to open up the space and give it a more 'mature' look. Easy way to mature-up a room - remove any baby change tables.
Another essential thing for making the room 'grow-up' was a desk. E needed a space to sit and draw, write, and create.  The solution - that old, solid as a brick, family heirloom, desk was moved in. The only problem was it was painted yellow and had bird cutouts modge-podged to the side of it.
It needed a new paint job - here is where the navy blue makes its first appearance. It was a long and grueling process, as it always is when trying to paint furniture, but, Jen's painting skills made it look extraordinary.

A unique metal piece above the desk was just the thing to hold all the pens, markers, glue sticks, scissors, and everything else a little guy needs to make his creative masterpieces. The clippy boards were put up to hold these works of art, and a splash of a red (and old fish shaped jello mold) added some fun.

Out of some old plaid fabric, that just happened to perfectly match the colours of the room, Jen sewed up a pillow to make that hard wood chair a little comfier. We all know that you cannot have a really creative time without making a mess, so, down in the corner, set back in the shadows, is a bright red little garbage can. Sometimes, it's the small detail that can make a room.

E's bed was given an entire overhaul - from paint to pillows. The striped sheets and pillow cases were exactly what fit the bill for this makeover. The red anchor pillow was a great find that fits in perfectly.
A wire basket attached (and reattached, and re-reattached...it's a long story) to the wall at the end of his bed provides a spot where he can store a book or two that can be quickly grabbed for a bedtime story.

A matching set of the striped sheets for the crib was also available at Target. The crib is only a temporary set up until Oskie is old enough for a bed, then a bunk bed of some sort will be brought in. But, it does not feel like a neglected corner. With the addition of a string of whimsical elephants and the matching sheets, the temporary set up fits right in. 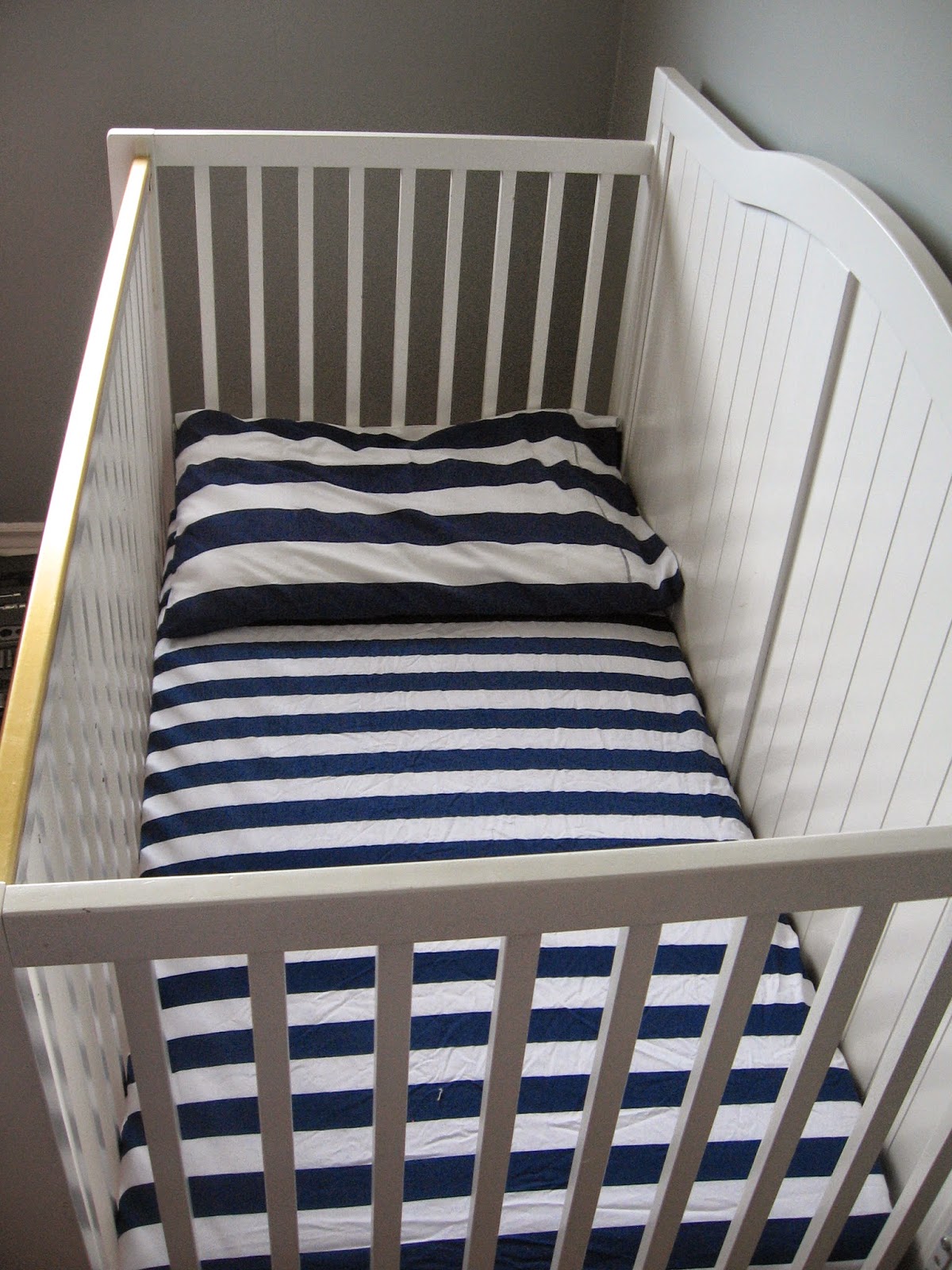 The window treatment between the beds really tie everything together. Always resourceful, designer Jen made these curtains out of the sheet set for E's bed. Can you think of a better way to find matching curtains?
The striped canvas pieces, with little anchors in the corner, were also made by Jen. This entire wall was made by her hands and cost only a few dollars - very impressive!


Another bargain project, that looks amazing and is a highlight of the room, is the red shadow box/display box. A garage sale find, that was haggled down by expert bargainer Matt to a mere $10, had some obvious potential. But, the keen eye of Jen, and her amazing vision, saw the great impact (and useful storage space) a big piece like this could make in the room. The colour makes it pop, the small 'guys' and cars make it interesting, but most of all it is beloved by E. The more red stuff in the room, the better, is his motto. 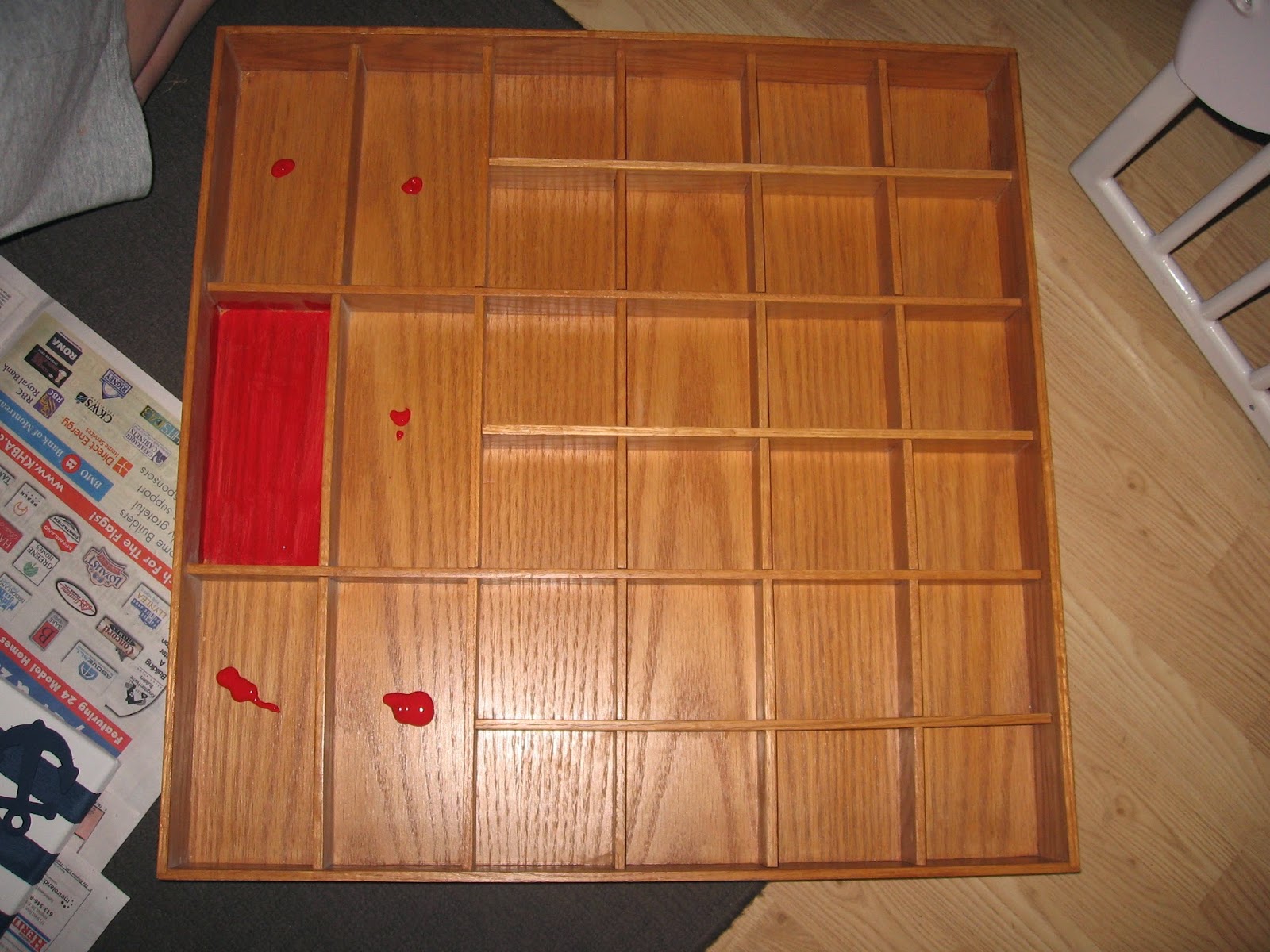 E was no slacker in the room makeover. He helped out where he could, like putting together the perfect sized red stool from Ikea, which would be put beside his bed as a sidetable to hold a lamp and an alarm clock.

A space to put Oskie's knick-knacks was another task that designer Jen pulled off with her signature flare. The old white shelf has new life with the addition of bright frames, a clock, and other interesting eye candy, on the wall underneath it.


The closet, which has been lacking a door since the beginning of the Place Under the Pine, was given a remake approx. one year ago. Cube shelving makes things tidy and provides much more storage than it appears. Two fully stocked wardrobes (and you know how many clothes each kid has) are in that closet.


Overall, the remake accomplished everything the room needed...and more. It is now more than a place where the boys once slept. It is a place to spend time; drawing, writing, thinking, reading, listening to music, and just spending time. It is cozy. It is fun. It is the place to be. Oh, and it kind of looks like a cabin on a ship that is sailing to the south pole on a wild adventure...


Posted by Place Under The Pine