The Good Old Hockey Game You Can Make Yourself

If you are like some Place Under the Pine's Dads (in your mid thirties, borderline hoarder), you will have a box of hockey cards from the mid 90s in your closet/basement/storage unit. It may even be in your hands right now, headed towards the recycling box. Stop right there! You have an opportunity to get one more ounce of fun out of these cards with this idea. Here is a chance to play with your old toys again, and get away with it - just call it a craft for the kids. You will also burn a couple of hours in the process, which could be just what you need on a rainy day with two bored kids. Another plus, if you need it, is that the craft is free! All you will need is some old hockey cards (remove any Wayne Gretzky or Mario Lemieux cards...burn the Brett Hull ones), some scissors, tape, and an old cardboard box (optional).

Last Saturday, the crafting crew of the PUTPs found themselves cooped up in the house due to the weather - a rainy day. With a couple of hours to spare in the afternoon they went to work on this Hockey card craft.
Out came the scissors, tape, and "Dad's old hockey cards". 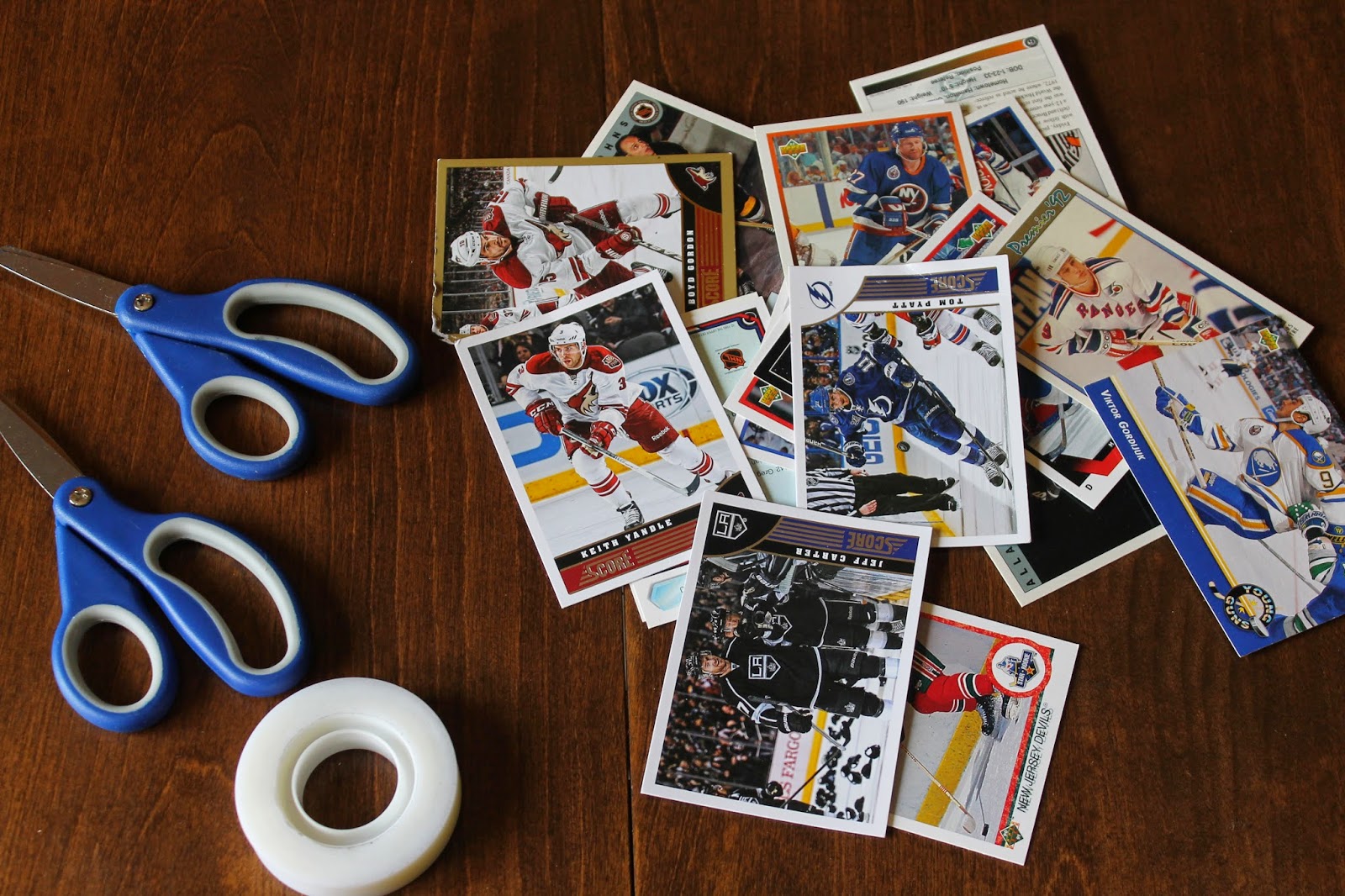 Here is the step by step instructions "Dad" gave the craft crew:

Step One: Take a card and cut the player out. It works best if the picture is vertical. Cut along the sides to make a rectangle shape you will tape to their skates to allow them to stand, and cut a hockey stick shape out to use as their hockey stick.

Step Two: Tape the rectangle shape to their skates and tape the stick to their hands. It doesn't have to look pretty.


Step Three: Fold his foot rectangle thingy back on either side to help him stand up. This may take some finagling to find the right balance and hockey stick length.

These were the extent of the instructions given out by "Dad". Of course, the craft crew had to take things further.
A big piece of cardboard was liberated from the recycling bin by the craft crew who quickly turned it into a hockey rink. Lines were drawn and the face off circles were marked in. Even ads were cut out  of the weekly flyers to paste onto the boards just like at the real arena. 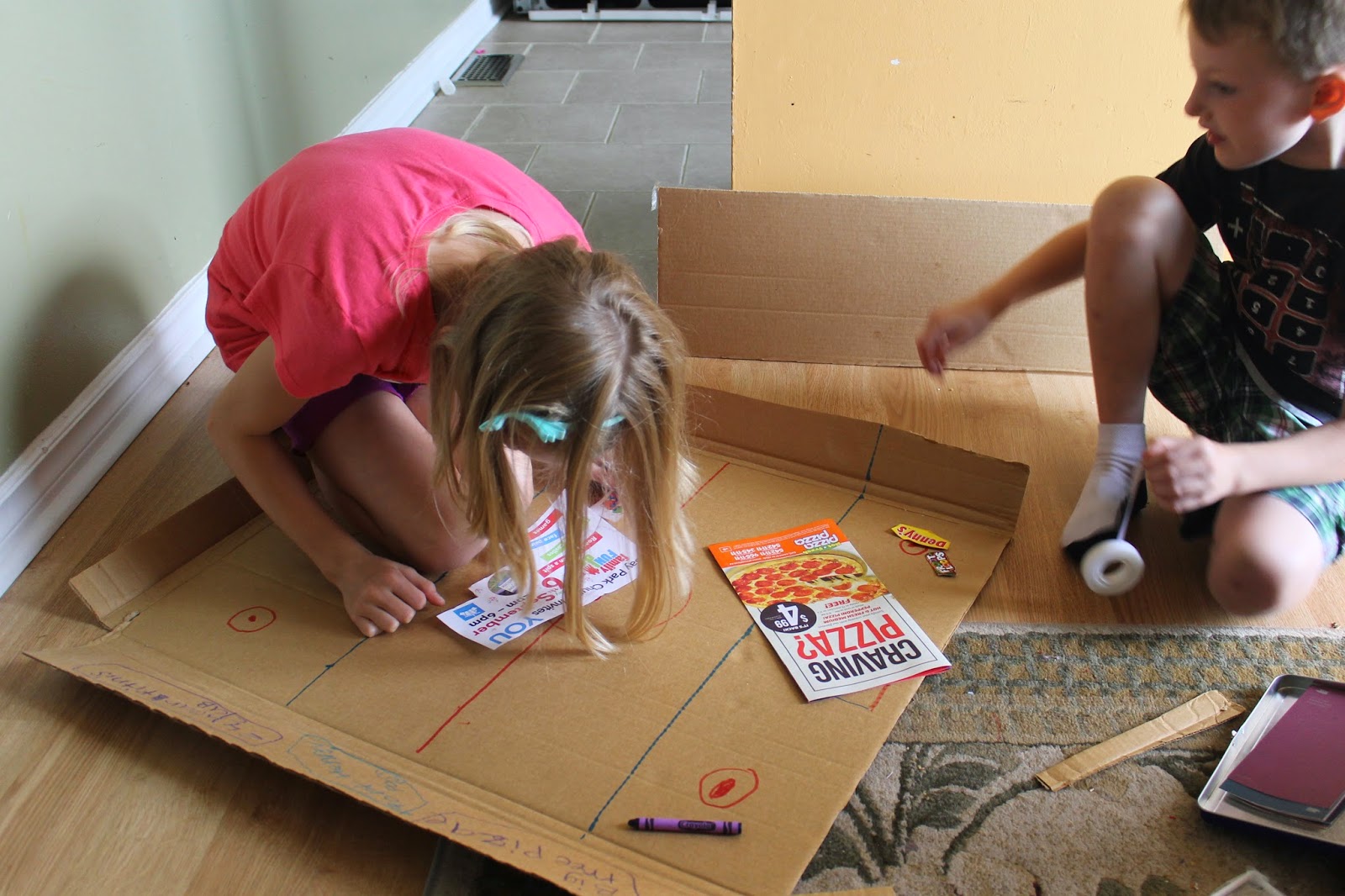 Dad did not intervene in this creative time, but, instead told the craft crew to take their time. Which they did, adding another half hour on to what was later termed 'distraction time'.
Dad was seen drinking coffee while this was going on.
Awhile later, with sides taped up and adverts on the boards, the hockey team was set up for a photo op. 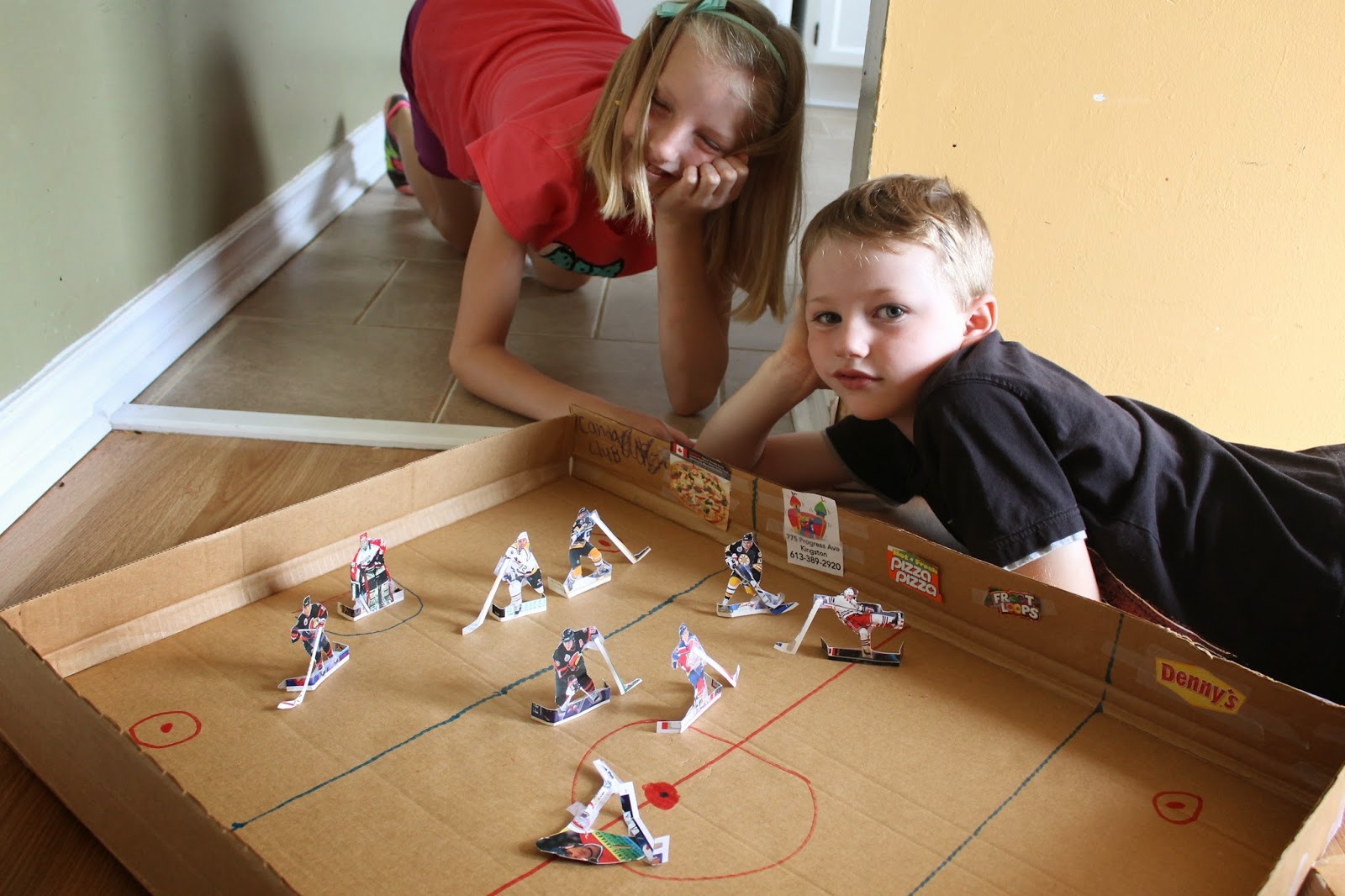 Then the games began!

A variety of games were invented by the craft crew.

A) The Classic - A paper ball was hit by the paper hockey player. The hand holding the player moved it anywhere on the board at anytime.
B) The Freeze - Each participant had so many 'guys'. They set them up and dropped the ball/puck. The closest player got to hit it. They moved their players around after each shot.
C) The Crunch - One participant, usually a five year old boy, took one paper player and crunched all of the other paper players. This was the most popular game by far.


Additions were added to the ice including nets and a penalty box.

Another wonderful creation was the Zamboni. This version has 'kind-of-lighting-bolts-kinda-wings' which made it 'zoom' and clear the ice faster than a regular Zamboni.


This free craft was a great chance to use those old, highly sentimental valued, hockey cards one last time before they hit the recycling box and also an hour (or more) distraction for the kids. Win win in the world of kids crafts.

Kingston | 19:03
Posted by Place Under The Pine