TIME WITH JUST ONE CHILD

Around the Place Under the Pine there is plenty of family time when everyone is gathered around the table for a meal, a board game, or just drinkin' tea. There are also many times when just two kids are together with Matt; the older ones playing Skip Bo while Oskie has a nap, or the boys playing mini stick hockey in the living room (don't tell Jen) with Matt. Rarely are there one on one times...and even rarer still - Oskie and Matt.
With one kid you have all the time you want to spend with them, one on one. With two it is halved (approx). With three there seems to be a different dynamic and instead of having a third of your time to spend with your youngest it ends up being much less. Which is why every small opportunity to spend with your third (or fourth or fifth...) is special - even if it just a quick trip out to the grocery store to get taco seasoning for dinner.
This weekend was one of those rare times when the stars aligned and found the girls off to see the new Cinderella movie and Elli off to play at a school friend's house...leaving Oskie and Matty to fend for themselves.
They decided to take advantage of the sunshine and head out for a hike. What a great way to spend an hour or two together.

Hiking around with one little set of legs with you is relatively easy (says the veteran Father of three). It's when you have three explorers all going in different directions that things can get tricky! 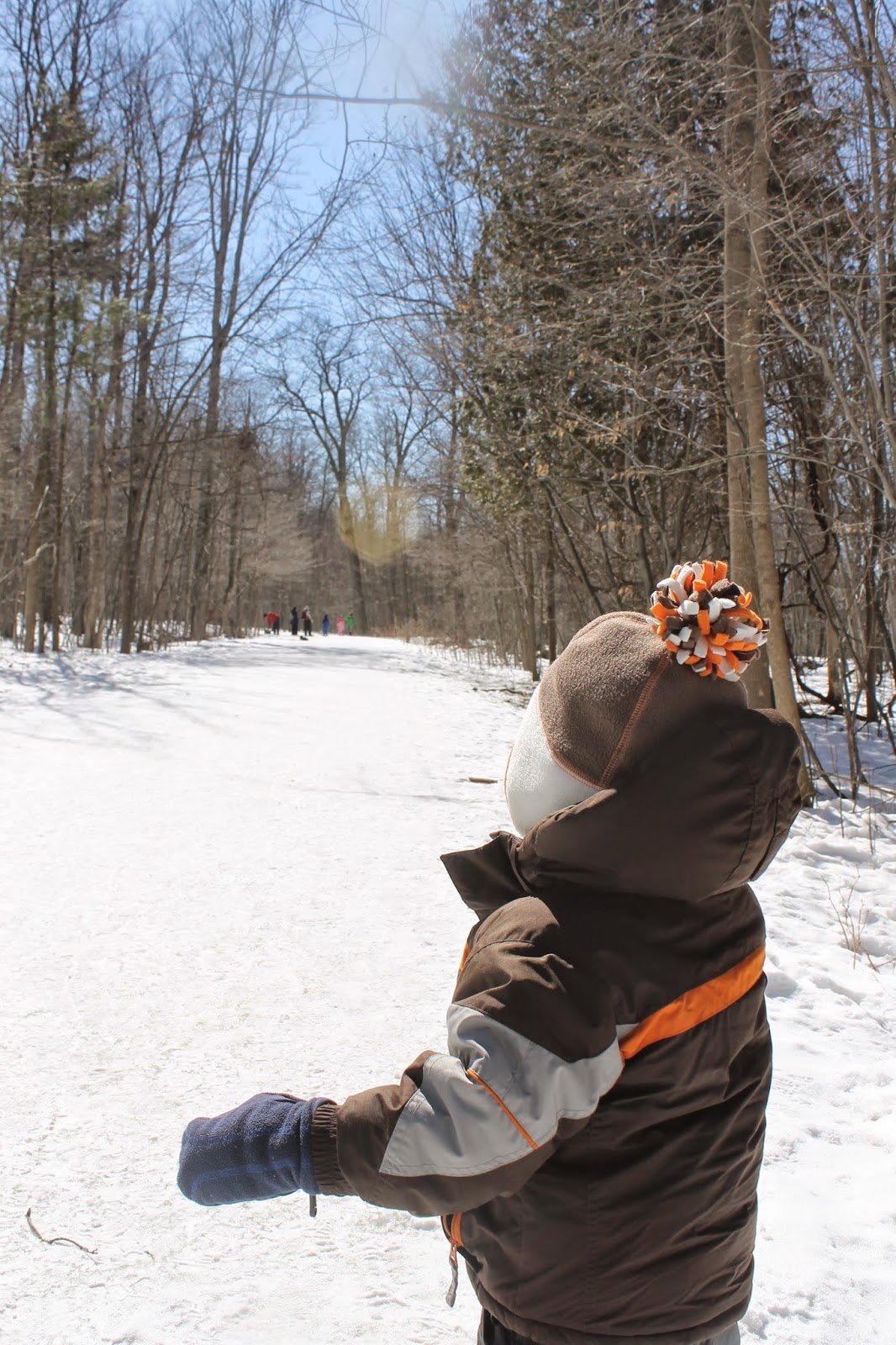 Oskie is one of those 'off the beaten path' types. With a clearly marked trail, and instructions to stay on the path, he prefers to skirt the edges. Breaking new trails in the melting snow. Giving chase to the brave squirrels that linger near the clearings. Much like his sibling were at his age. However, he seems to be more observant than they ever were, spotting all the moving things in the woods and the trees - even stopping to listen when the birds tweet. For a novice outdoorsman he has some great instincts for nature.

He also has outstanding stamina for a fresh faced two year old. Marching along at a good pace for a couple of kilometres before finally giving in and asking for lift.


Without the other kids around Oskie had a chance to stop and inspect every piece of grass or snow that interested him. He did not need to rush and run to keep up with the 'bigs'...although he still did 'run' most of the way. That is just his style.


The two hikers managed to cover a big chunk of ground on their hike, through woods, fields, and waterfront.

The hike gave Oskie a chance to really voice his opinion, for eg when standing near the frozen shores of Lake Ontario he was insistent upon throwing rocks. Rocks, rocks, rocks, and more rocks. This simple request was intriguing to his Father. It showcased the many ways Oskie is different from the older children were at age two. Oskie is much more self reliant, he makes his decisions and entertains himself for much longer periods of time (with less). He can chat like a four year old. He never complains about being cold. He is so observant, he does not miss anything.
These 'one child' moments also show just how similar all of the children are - smart, cute, personable...all in their own way.


Posted by Place Under The Pine